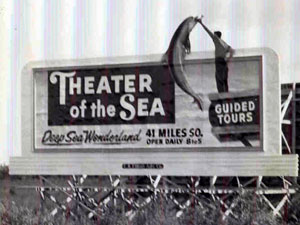 In 1905, Henry Flagler began one of the most ambitious projects in America when he began construction of the Overseas Railroad, an extension of the Florida East Coast Railway that stretched 128 miles from Miami to Key West. Initially called “Flagler’s Folly”, the construction of the railroad required millions of cubic yards of material to build a roadbed through the island chain, including large blocks of coral rock. Two islands, called Umbrellas Keys, were combined as one when Flagler’s railroad crews filled the shallow space between them. The Umbrella Keys then became collectively known as Windley Key, which encompasses the village of Islamorada. This area was the first excavation site to furnish fill for the railway and bridge approaches. In fact, three separate quarries operated in the Windley Key complex. The excavation process resulted in deep quarry holes that covered large areas of land. 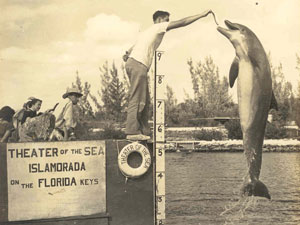 After seven years, three hurricanes, and $50 million dollars, the final link of the Florida East Coast Railway was completed in 1912. Flagler’s dream was finally realized and became widely known as the “Eighth Wonder of the World.” However, on Labor Day, September 2, 1935, a Category 5 hurricane made landfall in the Middle Keys causing heavy damage and destruction to much of the Overseas Railroad and flooding the Windley Key quarries. Already bankrupt, the Florida East Coast Railway was financially unable to rebuild the destroyed sections. The roadbed and remaining bridges were sold to the State of Florida, which built the Overseas Highway to Key West, using much of the remaining railway infrastructure. Much of the flooded quarry complex was purchased by Alonzo Cothron, a huge developer who probably did more to change the face of the Upper Keys second only to Henry Flagler. In 1932, Cothron began developing the land on a small scale, and proceeded to raise stone crabs there for several years with his business partner, Berlin Felton.

In 1940, a tourist traveling through the Florida Keys from Atlanta, GA noticed one of the roadside quarries, which although landlocked, was filled with seawater and colorful parrot fish. 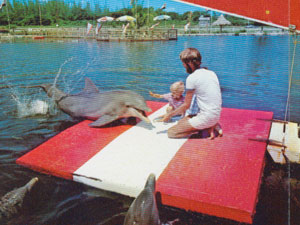 Knowing his employer, P. F. “Bud” McKenney, was attracted to fishing and the beauty of the sea, he told him of his discovery in Islamorada. After visiting the area for himself, Bud and his wife Martha envisioned the land becoming a live menagerie of sea critters, a Theater of the Sea, and the second oldest sea attraction; the first being Marineland in St. Augustine which opened in 1938. Alonzo Cothron agreed to lease the land to the McKenney’s, and in 1941 they sold their ice cream parlors in Atlanta and moved to Tavernier to begin their new business venture. However, with the outbreak of World War II, they were forced to put their plans on hold and moved to Coral Gables.

Following the end of World War II, the McKenney’s returned to Tavernier in 1945 to continue construction of their Theater.

Alonzo Cothron assisted in the removal of additional coral rock as McKenney himself developed the property. Milton Santini, a local fisherman, was hired to transport four dolphins to the park and allowed the facility to open its doors in 1946, offering daily porpoise shows and guided marine life tours in an intimate, up-close and personal setting. The park operated from 8:00 am – 4:30 pm and admission was $1.50 for adults and $0.55 for children over seven years old. 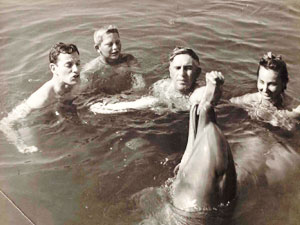 In June 1950, trainer Cliff Ambrose began developing an act with three of the dolphins. He would swim with them and “try hard to show them that he can do anything they can do – almost.” Two of the dolphins, Jeannie and Buttons, became the most famous stars of the show. Jeannie was known for her personality and “tricks”, which included tooting a horn and ringing a bell, whereas Buttons would leap out of the water to grab a fish from atop a high tower platform from trainer Bill Malloy, after he waved it in the air, and became known as one of the World’s Champion Jumping Porpoises. Guests were not only invited to get their photo taken while feeding the high jumpers and touching a dolphin, but they could ride on the world’s only boat propelled by dolphins! This was Theater of the Sea’s answer to the energy crisis! The show demonstrations became so famous that countless celebrities paid a visit to the park, including President Dwight D. Eisenhower, and President Harry S. Truman, whose son-in-law Clifton Daniels fed Buttons a fish from the twenty foot high jump tower. Radio and TV shows with Arthur Godfrey, Hugh Downs, Pat Fontaine, and Jaclyn Schooly were also broadcast from Theater of the Sea, including an entire filming of NBC’s Today Show. 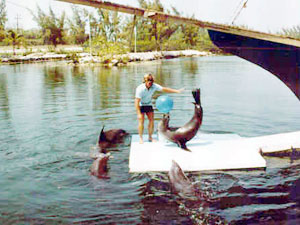 The park was also featured in numerous periodicals throughout the early years, including the Miami Herald, New York Picture Newspaper, Illustrated, the St. Louis Dispatch, German paper NeuePost, Chicago Daily News, and the Keynoter. Fourteen year-old Clarence Lowe was featured in a few articles dated November 5, 1950 and March 3, 1951. He claimed to be the only sportsman to have acquired the art of porpoise-riding. Newspaper articles described his interaction with the dolphins in many ways… “the porpoise – Buttons – comes up for air and then the two are off on a submarine speedboat trip that must feel like a journey through a washing machine.” These in-water demonstrations were the early beginnings of what would eventually evolve into today’s dynamic waterwork performances.

While many advancements were made throughout the 1950s, the 1960s proved to be a pivotal era for the park. The property underwent dramatic modifications by both McKenney and Mother Nature at the start of the decade. In September 1960, Hurricane Donna swept through the Middle Keys and created a reported storm surge of 13 feet which practically destroyed the facility and displaced many of the park’s animals. Devastated but not defeated, McKenney viewed the resulting aftermath as an opportunity for restructuring. He proceeded to fill in the closest roadside quarry and dig out new pools in other areas of the property. This expanded the animal habitat into seven different pools, which consisted of 12 million gallons of water, and encompassed approximately 3-acres of land. Theater of the Sea then began advertising itself as the “World’s Largest Outdoor Aquarium”, and became one of the largest natural dolphin habitats in the world, if not the largest at the time. The very naturalness of the pools remains one of the most outstanding features of the park, and brochures compliment nature as the decorator, as she herself recreates the beauty of the outside reefs. 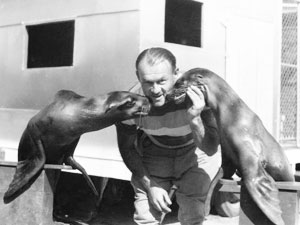 Two years after Hurricane Donna, Theater of the Sea was met with adversity once again. But this time it was in the form of political turmoil. One of the major conflicts of the Cold War drastically halted tourism on a national level. In the Fall of 1962 the Cuban Missile Crisis created a sea of panic among many travelers to the Florida Keys. Although Theater of the Sea’s revenue suffered as a result of decreased public interest and admission, tourism began to rebound by the end of the year. Despite the crisis, Bud McKenney’s unique creativity never ceased. His park already offered a one-of-a-kind porpoise powered boat ride to the public, and he then envisioned another “first” with the advent of a bottomless boat ride. This attraction was intended to further facilitate guest interaction on a personal level. Two “clownish porpoises” would come into the open center of a large pontoon boat as it traveled down the lagoon and put on a show just a few feet from awestruck spectators. To this day the bottomless boat ride remains a must-see part of the Theater of the Sea experience. 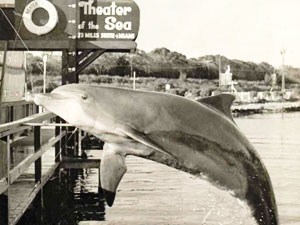 In the 1970s, Theater of the Sea’s defining landmark was built alongside dolphin stadium and would become part of the park’s ever changing logo. Local pastor Marlin Simon was hired to design and construct a tall ship with a high tower platform extending from the ship’s bow. The large brown ship with white billowing sails became the park’s unique focal point and remains an integral part of today’s dolphin show for daily high jump demonstrations.

For over forty years, Bud McKenney devoted nearly every day to operating and overseeing his beloved park. While Theater of the Sea has pioneered many achievements, its uniqueness has remained constant. Long before eco-tourism was popular, Theater of the Sea framed itself as the place where visitors got involved, up-close and personal, touched and fed the animals, and had an individual guide that personalized the experience and stayed with patrons to answer questions. Today, we call this experiential learning, and feel that it is vital to make a lasting impression by creating direct connections between people and nature through a real experience with an individual animal that people can name and remember… a life changing event! Theater of the Sea was doing this long before it was popular. Needless to say, the uniqueness of Theater of the Sea is why it has remained so successful. The shows have always been presented in an intimate manner where guests are not high in a grandstand. Instead, they’re right down on the scene taking part in the acts if they wish! They can become part of the show as they shake hands with a sea lion, pet a shark, tickle a turtle, and kiss a dolphin. The shows are an encounter with fishes and mammals on a first name basis where informality is key! 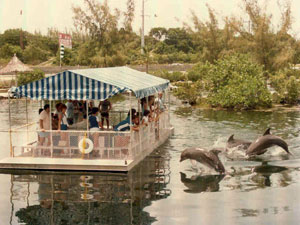 After passing away in the late 1980s, Bud McKenney’s widow, Martha, remained involved in their lifelong endeavor but relinquished management of the park to their son P.F. McKenney, Jr. and daughter Martha Arender. P.F. “Kenny” McKenney, Jr. has successfully followed in his father’s footsteps by maintaining and enhancing the park in a manner that has paralleled and often exceeded his father. Nowadays, the 17-acre property of lagoons, waterfalls, and lush tropical gardens is home to a variety of animals including Atlantic bottlenose dolphins, California sea lions, sea turtles, sharks, rays, tropical and sport/game fish, invertebrates, crocodilians, raptors and parrots. Theater of the Sea not only continues to grow and become more beautiful each year, but takes great pride in consistently providing a wonderful home for the animals while sharing them with visitors in ways that inspire awareness and sensitivity towards animals, the environment and conservation issues.

No chewing gum, straws, alcohol, or outside food permitted in the park.